I spent much of the last weekend in the kitchen with Declan preparing meals for a retreat group and listening to scientists, optometrists, and reporters on NPR conversing about solar eclipse visibility and the dangers of gazing at it without proper eyewear.  It was never really my plan to watch the eclipse anyway, although I admit, the mama in me still texted my 21 year-old son to make sure he wasn’t planning to watch without those silly glasses.  As the days drew near for today’s big event, instead of planning to go out and join the eclipse watching party, I felt more inclined to draw inward, meditate, garden, and read or sit on a river rock with my daughter, all of which I managed to enjoy this week. For me the eclipse wasn’t as much about seeing it as about feeling it… and I sensed the energy of the moon and the sun in every step of this past week, gathering into a peak today, even though I only set eyes on the sun at its first rise and at no time during zenith or the eclipse itself.

It’s not that I’m uninterested in the beauty, mystery, and incredible science of our stars and planets–I am. But today I am more curious about what it means to eclipse or for some part of myself or us as humans to be eclipsed. Can we allow our solar ego center, aka manipura chakra, to be a backdrop for the momentary real show: the moon as it takes center stage to reveal what we might prefer to keep hidden? Get ready for a little bit of a ramble here.

I wonder what impact this auspicious event has on us energetically, and if the intentions we set are really magnified at times when the sun and moon align.  I believe they are–big time. Perhaps these things mean nothing to you, and going out to look through a funky pair of protective lenses to take in a rare event is cool enough; but after the eclipse of the sun is complete, what difference will it make if any?

The truth is, the impact each one of us can make if we see this event as an opportunity to surrender old, destructive patterns, or samskaras, and replace them with thoughts and actions to bring about our highest good and support our conscious evolution could be, well, astronomical!  The covering of the sun by the moon is an opportunity for each one of us to look at our own shadow side and to transform by fire (the sun, the campfire, our yoga asana practice) the patterns that do not serve us or the work we are here to do in this world. Each time we practice this release, we allow the ourselves to be in darkness so we have the opportunity to emerge and bask in the light… maybe even don the golden ring that happens at the height of this eclipse–a divine halo that each one of us can wear in the world–if we choose it. Will we choose to look at the dark side of ourselves, or are our protective lenses too thick to attempt the soul searching we are here to do as individuals?  If we take the prescriptive goggles away (you know, the ones that tell us what to think), can we learn to turn to the “internal infernal gaze,” and if so, what are we looking at anyway?

Maybe I’m chipping at too big of a question for this rambling little blog post, but what I’m driving at is that our ability to do some self-study (in yoga we call it svadhyaya) gets us a little closer to understanding that we are all part of the collective consciousness.  If we begin to raise our own awareness, we will, in fact, help raise the awareness of our fellow humans; but it has to start with ourselves.  No use worrying about humanity and going on a crusade for peace if we have our own closet full of hateful or fearful thoughts to clean out. Roger Waters, lyricist for Pink Floyd, recognized the dark side in each one of us–the side we hide from each other or try not to show as well as the side of others we sometimes cannot see or even imagine but that we all have in common.  Admitting “the lunatic is in my head…” is perhaps the writer’s way of  recognizing that we luna moths must all eventually flutter into the fire if we want to burn away the dark (and maybe even beautiful) wings of our destruction. Deborah Adele says in her book The Yamas and Niyamas, “tapas is the willingness to be both burned and blessed.” Anybody game?

A fellow yoga teacher once told me as we sat in her tiny studio overlooking the blue waters of Nicaragua’s Little Corn Island: “raise the vibration of your purpose to a higher level.” I have taken that statement as a mantra.  It feels, more than ever, a powerful call to action in my own life.  I am learning more and more that I can only ONLY be responsible for changing myself–I cannot alter someone else’s thoughts, beliefs, or actions; only they can do that.  I cannot make someone like me or expect someone will change his beliefs because it’s what I want; it is folly to preach that people shouldn’t kill each other over ideology the same way it is an imposition to ask an unwilling person to take care of her neighbor who needs help because it is the right thing to do.  I can only do my best to be a good human: a loving friend, a steward of this land and planet I am so blessed to live upon, and a reflection of the light that is already in me.

Last night I walked into the dark under a starlit sky to sneak-take a photo of a group of women circled around a sacred fire on their closing night here at Dragonfly. There was an opening in the ring–a vacant spot, and as I approached, I was immediately invited in, and the gap was closed. In an instant, my singularity was absorbed into the collective glow of a dozen other radiant and courageous women and their beautiful fire. One at a time, each bared her soul to the group and shared a shadow side–a samskara she has been stuck in and which she knows must be transformed through flame in order to be rid of it. They had spent the day preparing for this moment, and their sharing was powerful. It allowed for holding, acknowledging, empowering, and the understanding that every release was both singular and collective. When it came to me, I was asked to share a “release,” and my stomach flipped.  I know what my deep grooves are. I know they are destructive and dark and painful.  I know my own shadows are also the reflections of what I criticize and see as faulty in others. 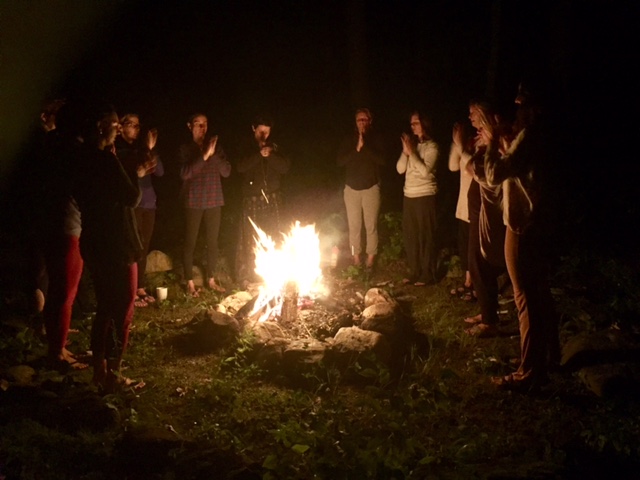 Here is my heart’s release–a gift the fire consumed and then breathed out in a trail of smoke to the ether: I said aloud that “I let go of the need to be perfect,” but my heart also spoke these silent words to the fire: I will let go of my my fear of being alone and of being left out, my worry that you won’t like me and my clinging to relationships that produce anything other than joy; I release my fear of speaking my truth in all situations where it is necessary to do so. I surrender my need to be the perfect wife, friend, or teacher and my need to know it all at once… I let go of fear itself…the list goes on.

When it came time to set new grooves and offer the fire an intention–a sacred flame to tend in the heart, I felt a well of courage and longed to say all of these things: I will embrace my strength, that I actually like who I am, that what I saw as my “imperfections” are actually what make me unique. I intend to speak up for myself and others even when a wave of fear wants to pour water on the fire of my courage…that I love being a student as much as I love being a teacher.  I invite more and more love into my heart. The words I actually uttered aloud to the circle: to give more.

Gandhi charged each of us to “Be the change you wish to see in the world.” In Reiki we say: Be the Light. In Yoga we say “Namaste,” or “I honor the light in you, because it is also in me.” This morning in yoga class, one of the retreat leaders asked her yogis to take the ring of light created by the moon passing in front of the sun and to “wear it like the crown you deserve.”  Here in NH, folks didn’t witness the complete darkening of the sun, but it was still a powerful and wondrous day of opening, of shift, of permission.  I allowed the ego “me” to be eclipsed, and I now I see myself in a new light.

With love, light, and many blessings,

1 an obscuring of the light from one celestial body by the passage of another between it and the observer or between it and its source of illumination: an eclipse of the sun.

• a loss of significance, power, or prominence in relation to another person or thing: the election result marked the eclipse of the traditional right and center.

2 Ornithology a phase during which the distinctive markings of a bird (especially a male duck) are obscured by molting of the breeding plumage: [ as modifier ] : eclipse plumage.

• literary obscure or block out (light): a sea of blue sky violently eclipsed by showers.

• deprive (someone or something) of significance, power, or prominence: the state of the economy has eclipsed the environment as the main issue.

1 losing or having lost significance, power, or prominence: his political power was in eclipse.

2 Ornithology (especially of a male duck) in its eclipse plumage.

Middle English: from Old French e(s)clipse (noun), eclipser (verb), via Latin from Greek ekleipsis, from ekleipein ‘fail to appear, be eclipsed,’ from ek ‘out’ + leipein ‘to leave.’

I am the mother of two adult children: Finnian and Bridie, a former English teacher, practicing yoga instructor (21 year practice; 16 years a teacher); lead singer of The Starlight Honeys); I garden, hike, snowshoe, cook, write poetry, and hang out with my squeeze, Declan, my three cats and two kids. Life is good in NH, where we live on "Dragonfly Farm," a 30-acre hilltop and forest paradise that borders White Mountain National Forest and Conservation land. View all posts by Katie

2 thoughts on “Eclipse Me”