Just outside the Bengalaru city limits, Manohar pulls into the breakdown lane, hops out and pops the hood as a trail of smoke rises from the engine. “I thought I heard something a while back,” says Brendan. He gets out to take a look. The serpentine belt is sufficiently shredded. Annie and I venture a peek as the guys are pulling the last strings of rubber from someplace deep inside the car. The rest of the belt is on the ground. Oh-oh. Not the way we want to begin our drive to Mysore! 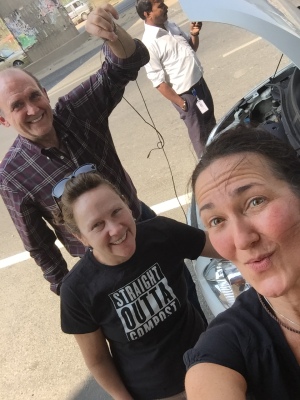 We make the best of it by taking a walk, and end up a wedding reception venue where flowers from the events of the night before are strewn on the drive up and walkway to the humongous hall. Workers are cleaning the grounds and happy to take a break from the sun when they see us approach the giant Ganesh adorning the blue entryway. They ask where we are from and where we are going. One of the men is especially friendly and encourages us “come in, please come inside!”  The hall is set up with hundreds of seats (a small wedding in India could have 800 guests). It’s not much to look at, but if it’s anything like the wedding we attended last year, I bet last night it was a marvelous spectacle of colored silk and piles of food.  We stay long enough to use the bathroom, and on our way out ask what we should visit when we get to Mysore. The cheerful man who likes to talk tells us about Chennakeshava Temple Somnathpura, outside Belur. Apparently it was only discovered fifteen or so years ago after being buried in sand to hide it from invaders. That’s it. We are decided!

It would take a complete entry to explain how we got there, but let me just say it is an adventure. We are supposed to make it to Mysore by midday, but that is clearly not going to happen. We are on India time.  In Mandia, the sugar capital in the state of Karnataka, we turn down a road and rumble into a little village known for its fresh sugarcane juice and a sweet temple overlooking a river. Ranganathaswamy Sriranganapatna Temple is bustling with fruit stands and tourist shacks selling key chains with Ganesh hanging from a loop. Goats abound and lay across steps and stand at attention overlooking the river. 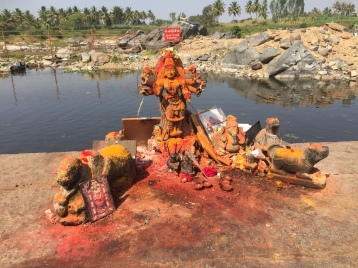 Inside a priest blesses us with holy water in exchange for our rupees, and we wander through with the villagers as they whisper their midday prayers. Around a corner, we are all struck by  the most beautiful wall of swastikas hand drawn with sandalwood and turmeric pastes. It always saddens me to think of how this ancient symbol of auspiciousness in Hinduism, Buddhism, and Jainism was stolen and so misused. The Sanskrit translation of the word simply means “one originating from eternity.” I try to look past not only the gruesome history of nazi-era Europe but also through the present turmoil we see in the world over race and religion… I look hard into this wall of gamma letters tied together in solidarity for unity, peace, and abundance for all. This collection of  gammadian crosses, drawn by the many-colored fingertips of people from all over the world gives me hope. 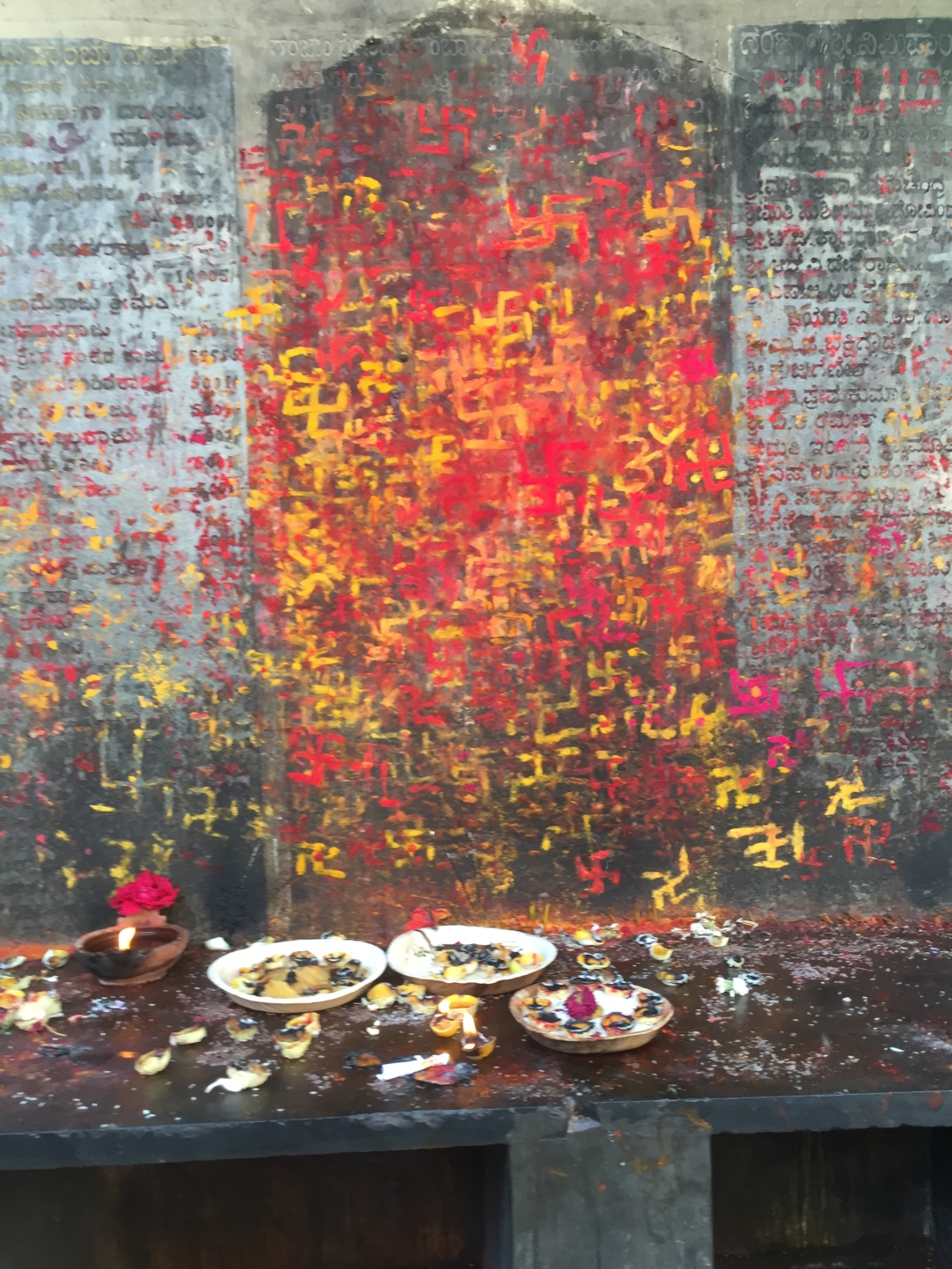 I buy a soapstone Ganesh from a man selling his hand-carved statues, and we head for the car. Manohar is on the ground looking up under the front tires and back down at a pool of oil on the ground. He shuttles us away, and we are told it will cost us extra to go to Chennakeshava. We argue a bit, using our earlier 90-minute breakdown as leverage, but we lose to the driver’s obstinate boss, who tells Annie from the phone that side trips are not included in our rate. We are all a bit tired and at first decide to skip the next temple and head directly to our hotel in Mysore, but after a few minutes the collective decision is made to pay the difference and go.

The oil leak eventually means we end up swapping the car for an SUV with a new driver on the side of a roundabout on the outskirts of Mysore. It is a quick shift of bags, and like a team in “The Amazing Race,” we speed away again from the city limits and into the countryside to make it to the temple in time for the late afternoon.  The roads get smaller. There are fewer cars and more farmers walking their carts across the road. Uniformed children come from school in little packs according to age, cows and goats wander the fields and streets, and people gather at tea shops and fruit stands. Pyramids of coconuts and watermelons wait to be chosen, and the glow of sunlight on the sugar cane is divine. The road turns to dirt somewhere along the way, and we know we are getting close.

Keshava Temple, as it is referred to locally, is set away from the road in a quaint little village lined with a few tourist shops and rows of colorful houses.  We buy tickets and walk toward the gate in to the Temple grounds.  I slip my shoes off, climb a set of stone steps, and walk into an entryway with giant turned columns and a raised covered walkway around the entire temple. The temple itself is set down inside this perimeter, and it is made almost entirely of soapstone. 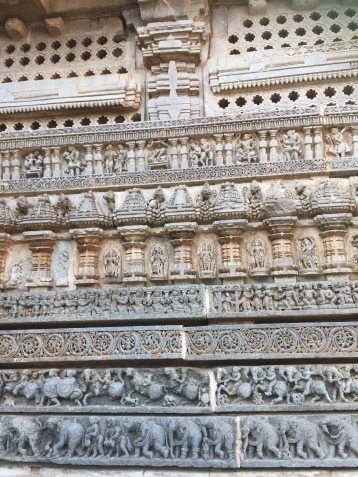 The temple is dedicated to Lord Vishnu, and the base carvings tell the story of The Ramayana, the famous love story of Sita and Ram.  Here is a link explaining some history: http//www.nativeplanet.com/travel-guide/chennakeshava-temple-in-Belur-003118.html#slide16019

The sun falls warmly on our shoulders as we take in the exquisite carvings. All the gods and goddesses are there: Hanuman, Lakshmi, Saraswati, Shiva, and a whole row of very interesting Kama Sutra carvings, which I would have missed if one of the temple grounds men hadn’t pointed them out. The three of us stare with our heads cocked to the side intrigued… “ummmm, how did they… are they???” And then we snap a few pictures of these sexy soapstone relics, laughing as we zoom in for detail.  Did I say this temple was built in 1117 AD? 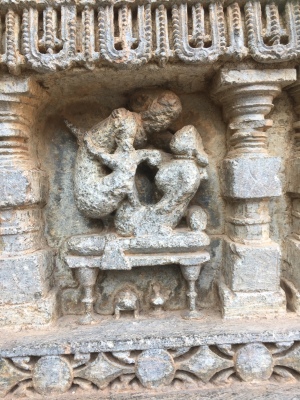 The most beautiful sunset pours light into the temple. It splits around columns, reaches its golden fingers through portholes, bends orange light across the cheeks of goddesses, and washes their mudras in gold at the close of yet another day set in stone. 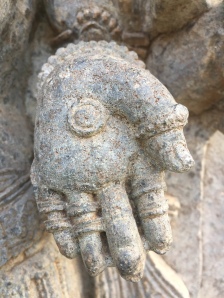 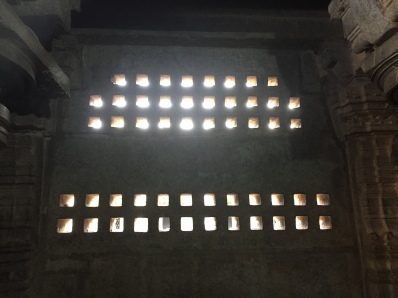 I am the mother of two adult children, a former English teacher, practicing yoga instructor (24 year practice; 19 years a teacher); lead singer of The Starlight Honeys); I garden, hike, snowshoe, cook, write poetry, and hang out with my squeeze, Declan, my three cats and two kids. Life is good in NH, where we live on "Dragonfly Farm," a 30-acre hilltop and forest paradise that borders White Mountain National Forest and Conservation land. View all posts by Katie